How the Fed Changes Interest Rates 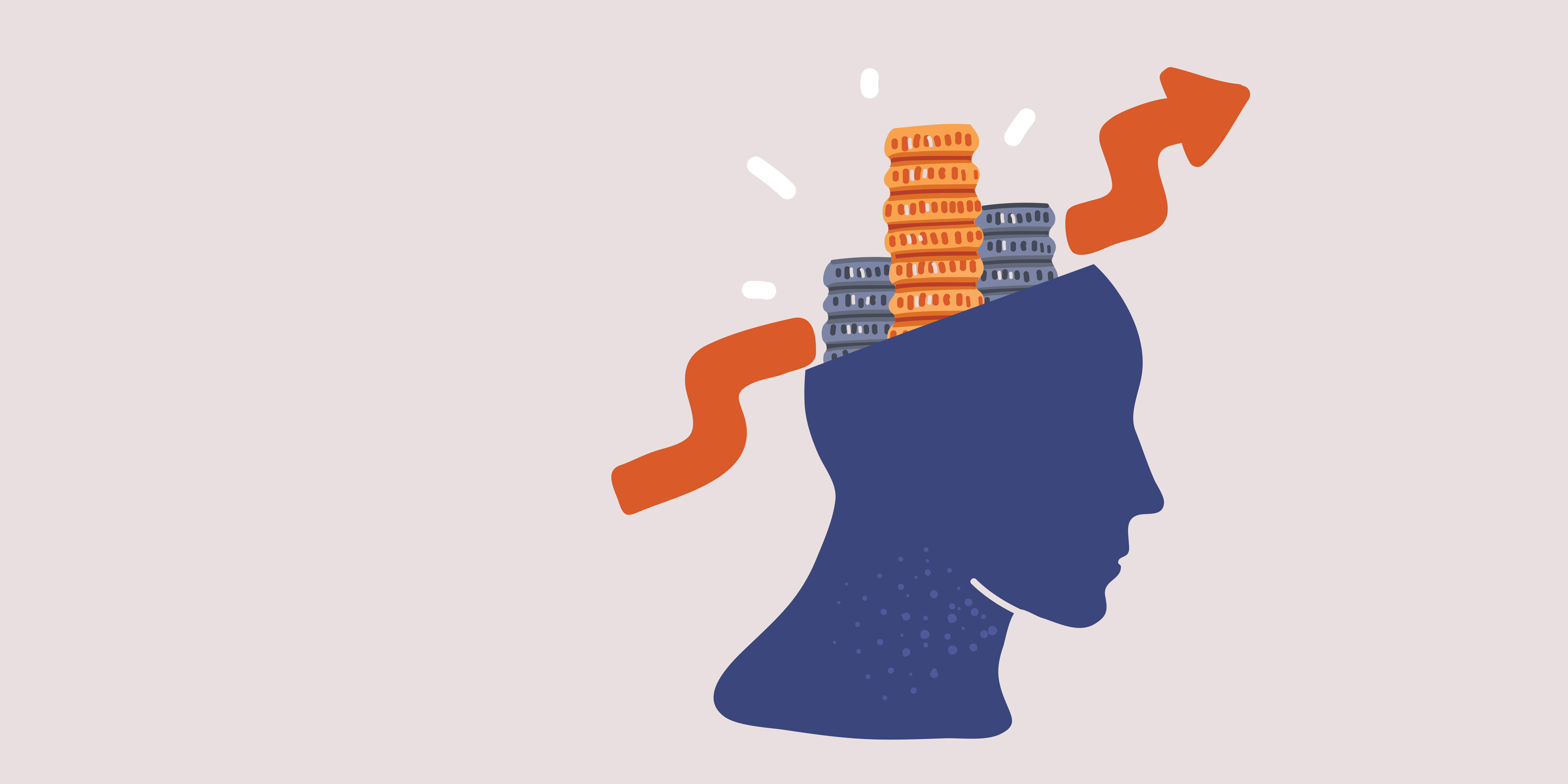 Most adults know that the Federal Reserve controls interest rates, but it's not obvious exactly how the Fed does this, or how those powers and methods have changed over time. Even in my career amongst finance professionals, most folks wouldn't know how to answer exactly what the Fed does to influence rates outside of rote buzzwords remembered from a long past Finance course. (No judgement, I would only bring it up because I myself didn't know!)

Very briefly, a commercial bank needs to carry some amount of reserve cash in order to operate successfully. This is itself a complex and dynamic topic, but suffice it to say that to be a good bank, the bank must have some credible level of liquidity, such that if I am a customer of the bank, I have high confidence that I can walk in and withdraw my cash at any point. It is expensive for banks to keep this reserve cash available, since it means that they aren't investing it elsewhere. If they have "too much" cash on reserve, then they are losing out on the potential income of loaning the cash out and receiving a higher interest rate. Whereas, if they have too little cash on reserve, they risk a liquidity crisis.

Managing this tension is a key balancing act for the bank. Every single day the bankers look at their balance sheet and need to decide if they have too much, or too little cash on reserve.

If the bank has too much cash, then there are many options to loan out or invest the excess cash available to the bankers (largely depending on how long they are comfortable committing to the investment).

If the bank has too little cash, then the only option is to borrow the shortfall from someone else. Realistically, there are two choices here:

When the Fed announces a change in interest rates, the rate they change is the Federal Funds Target Rate range. The size of the target range is almost always 25 basis points (e.g, from 3.00% to 3.25%), and in the press the rate that is published is usually only the upper target (e.g, "the Fed raised rates to 3.25%"). However, this is just a target range. The actual Federal Funds Rate (technically called the Federal Funds Effective Rate, or FFER) is set by the two banks borrowing/lending to each other, it is not set by the Fed. Banks can lend to each other at whatever rate they want. The Federal Funds Target Rate is just the Fed saying "boy, it would be great if banks decided to lend to each other at rates within this range, we think is best for the overall economy right now". 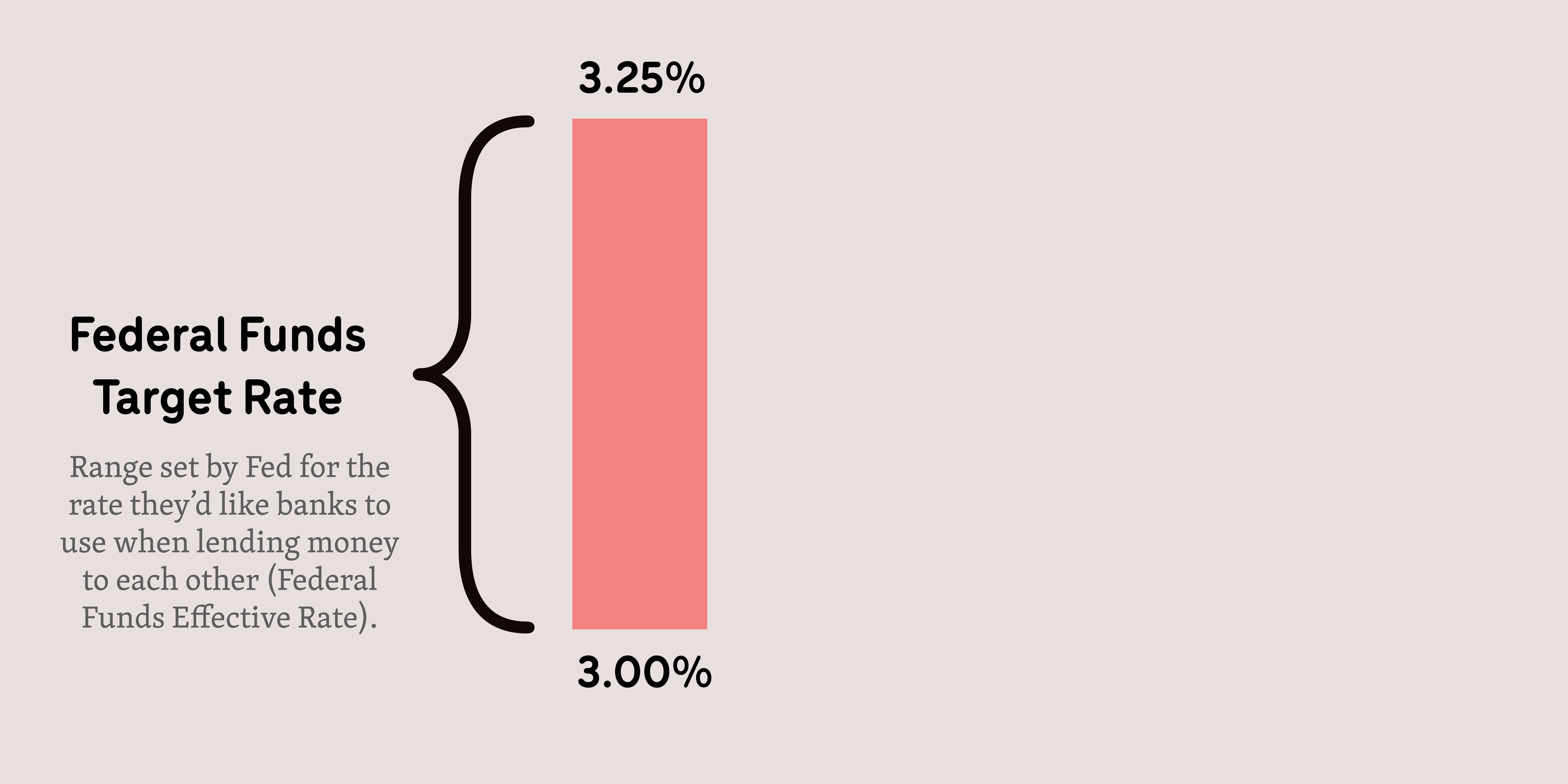 That said, the Fed has some powerful tools available to encourage banks to indeed lend to each other at rates within the target range.

First up is the Overnight Reverse Repurchase Agreement Award Rate (ON RRP). There is a lot of complexity on exactly how this works, but the high-level important piece to understand is that this facility allows Federal Funds Market participants to loan money to the Fed overnight and receive this interest rate. The ON RPP rate is set by the Fed, and it is always set about 5 basis points above the very bottom of the Federal Funds Target Rate range. Since lending money to the Fed overnight is the very definition of risk-free, and since the Fed will take an unlimited amount of money this way, there is no reason a bank would ever lend to another bank at a rate lower than this. 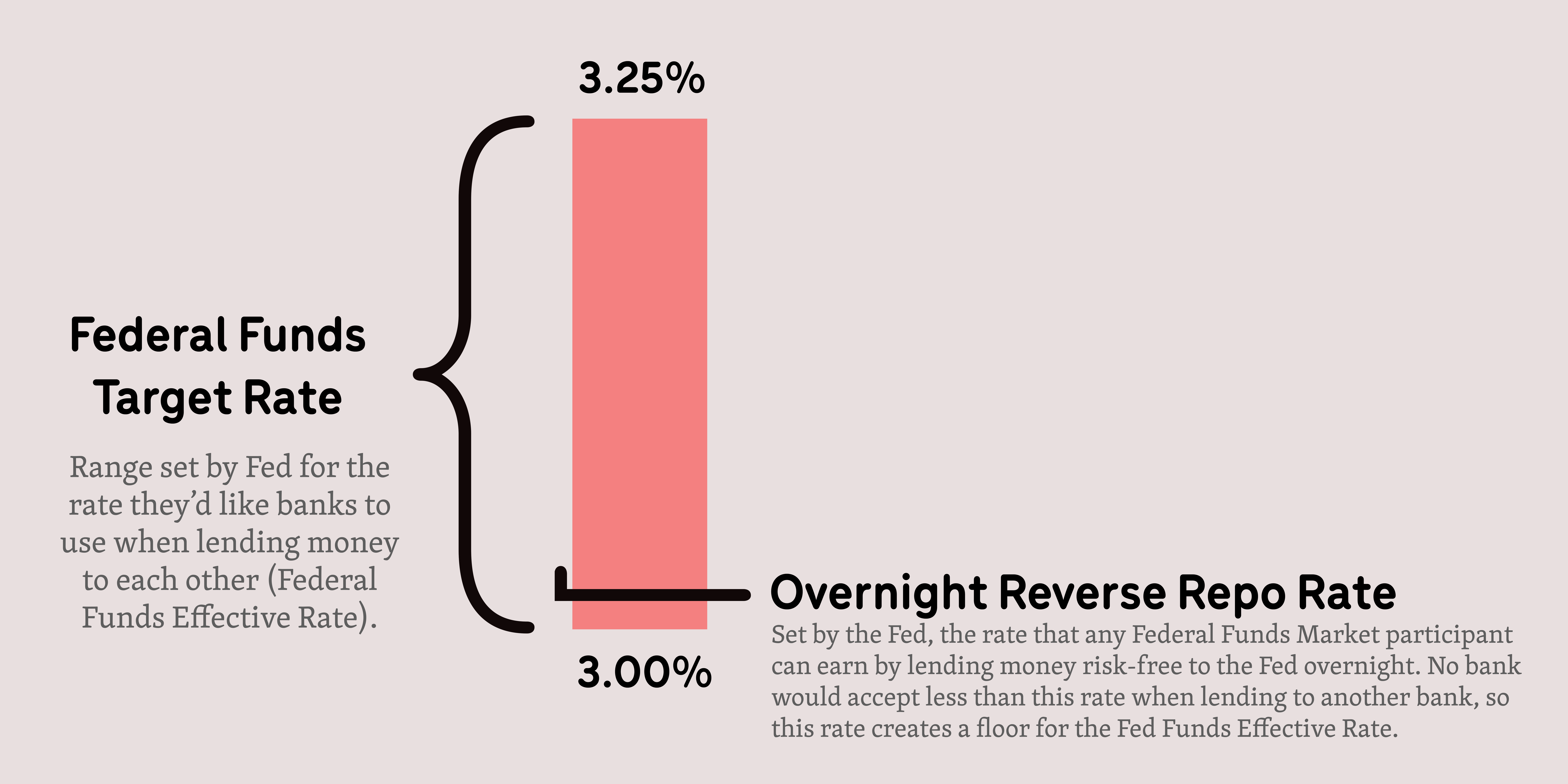 On the other end of the range is the Discount Rate. This was covered above, and is the rate that the Fed charges banks for borrowing overnight loans from the Fed. Since a bank can always get money from the Fed at this rate, it is unlikely that they would prefer to instead pay another bank a higher rate for the loan, creating a ceiling on the Federal Funds Effective Rate. 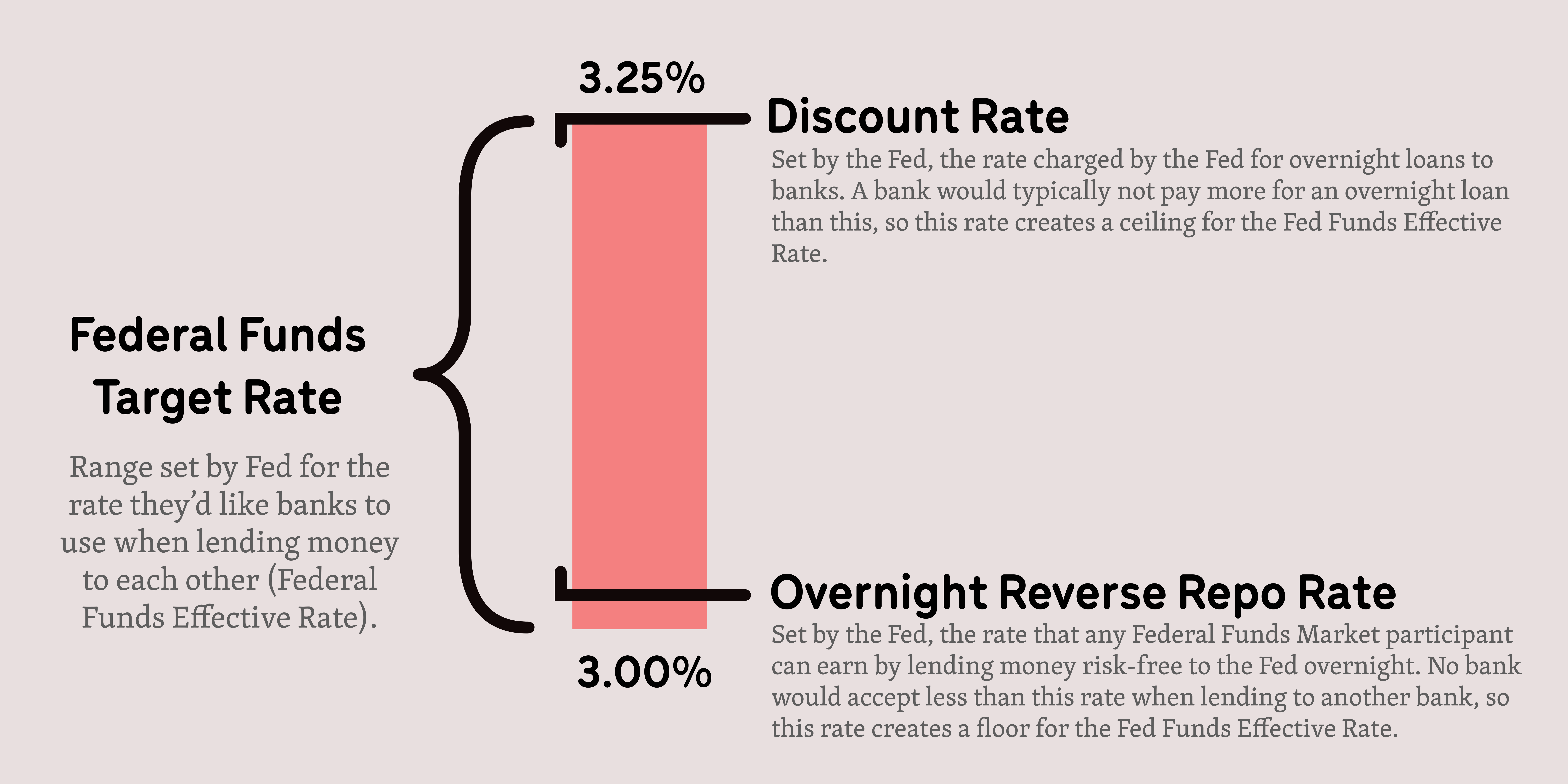 Next up is the Interest Rate on Reserve Balances (IORB). This rate, set by the Fed, is very similar to the ON RRP. It is the rate paid by the Fed on the reserve balances that commercial banks leave with the Fed overnight. The IORB rate is higher than the ON RRP. The main distinction between the two is that not all Federal Funds Market participants are eligible to receive the IORB rate, and so they must use the lower-paying ON RRP facility instead if they want to leave their cash with the Fed. 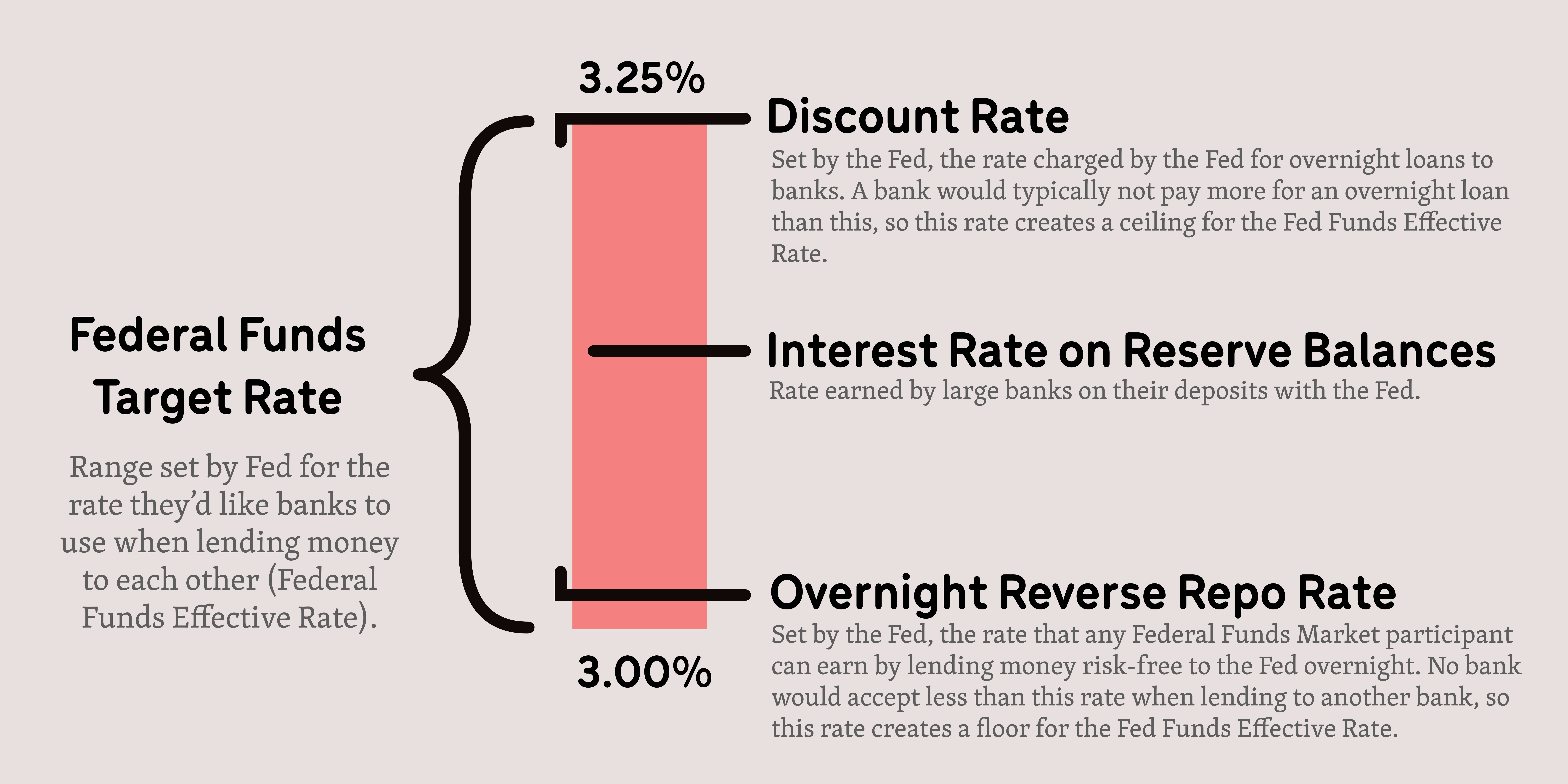 All that's left is to show the actual Federal Funds Effective Rate, the free-market rate set between the banks lending/borrowing money amongst themselves. As noted, this should always be above the ON RRP rate since any Federal Funds Market participant is able to get at least that much by lending to the Fed risk-free, and so would require a slightly higher return from a bank, given the slightly higher credit risk. Likewise, the Federal Funds Effective Rate will almost always be below the Discount Rate, since if the private rate were higher, any bank could instead borrow from the Fed directly at the Discount Rate.

In practice, the Federal Funds Effective Rate tends to hover slightly below the IORB rate. The IORB acts as an anchor rate, since this is what some (but not all) banks are able to get risk-free from the Fed. The FFER would naturally be a bit lower than this rate, since the institutions who cannot qualify for IORB will be willing to lend to other banks at a rate below the IORB (but above ON RRP). 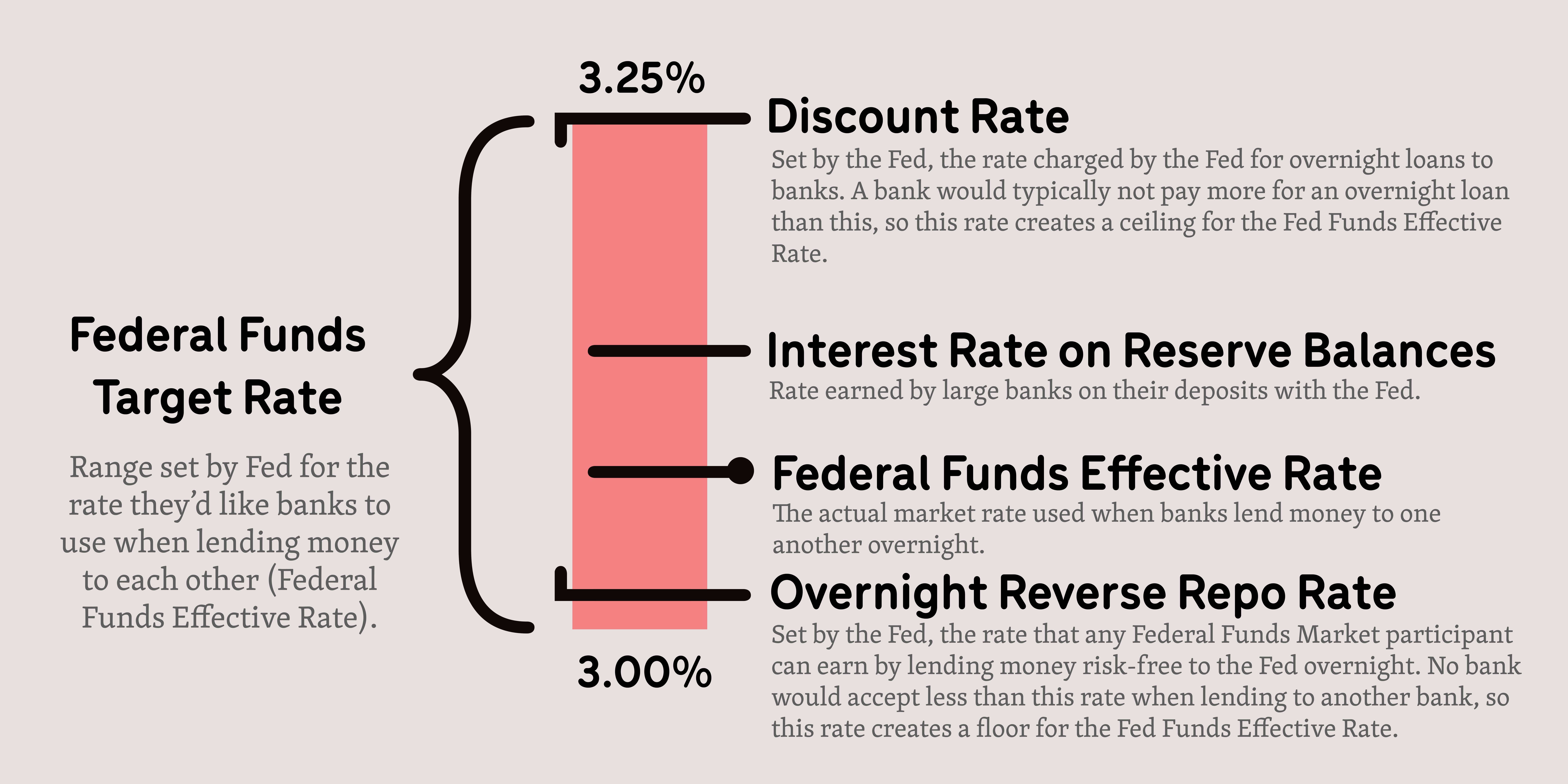 To summarize the important rates:

Lastly, below is a table with actual datapoints from the last year for each of these rates. The spreads between the relevant rates are very consistent over time.