The US Treasury Yield Curve is currently inverted, meaning short term interest rates are moving up, closer to (or higher than) long term rates. This unusual occurrence, called a yield curve inversion, has historically been a very reliable indicator of an upcoming economic recession. Since World War II every yield curve inversion has been followed by a recession in the following 6-18 months, and recessions are naturally correlated with decreased stock market returns.

Related Post: Stock Market Performance During Recessions. In the 11 recessions since 1950, the S&P500 drops an average 20% during the recession, and then recovers almost 40% in the following 18 months.

The below chart shows this model, tracking the spread between the 10-Year to 3-Month US Treasury Yield Curve. Recessions are indicated as vertical gray bands, and occur subsequent to each time the yield spread is inverted. The interest rates that these bonds pay reflect two main factors: 1) the Federal Funds rate, and 2) expectations of future returns.

The Federal Feds rate (aka the fed funds rate) is a short-term target rate set by the US Federal Reserve and is the interest rate that banks use to lend/borrow from the each other overnight. This is almost always the "interest rate" you hear about on the news when there are headlines about rates rising or falling, and this rate sets the foundation of almost all other economic interest rates.

Related Post: How the Fed Changes Interest Rates. Much more info on the Federal Funds rate; what it is, and how the Fed is able to manipulate it.

Since the fed funds rate is the rate at which you can effectively lend cash to the US Government overnight, this rate serves as the foundation of the yield curve—it is essentially a US Treasury bond with a 1-day maturity. When the Federal Reserve changes this rate, all other rates tend to change accordingly as well. 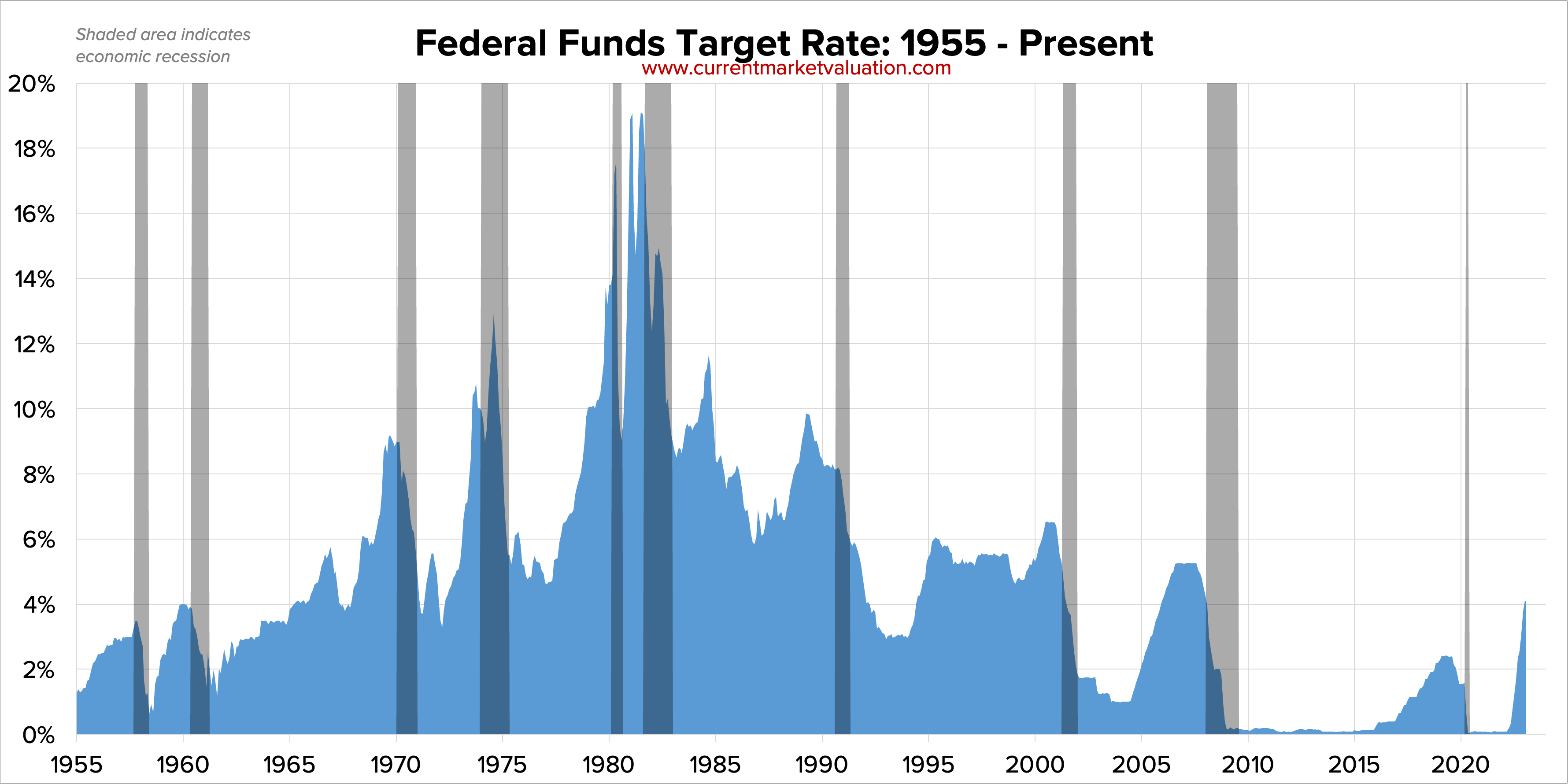 The Federal Reserve sets the overnight interest rate—but the interest rates on Treasury bonds from 1-month to 30-years are set by the market and fluctuate with investor demand. For example, assume that the Fed Funds rate is 2%. This indicates that investors can lend money to the US Government overnight and receive a 2% annualized rate of return. If that is true, then we would generally assume a 1-month Treasury bond rate to be a little higher than 2%. This is because investors value optionality. They like having access to their money in case something better comes along, so they require extra return if they're going to lock up their money for a full month - otherwise instead of buying a 1-month bond, they would just buy the overnight bond every night for a month.

To better illustrate this - assume that the 3-month Treasury bond rate is 2.5%. Again, this says that an investor can lend their money to the US Government for three months and receive 2.5% annualized interest in return. If you are the investor, what rate would you need to receive in order to extend this loan to the US Government from three months to ten years? Ten years is a long time, and many more attractive investment opportunities may come up over those ten years. If you've committed your money to a US Treasury bond and won't get it back for ten years, you need to be getting paid enough to be comfortable that nothing substantially more attractive is going to come along in the meantime. Otherwise, why not just keep investing in the three month bond every three months?

Accordingly, it is almost always the case that as the maturity period increases, the interest rate on Treasury bonds increases as well. This is called a normal yield curve, and is illustrated in the rates below, from Jan 2017. Yield inversion is the term used when long term rates are lower than short term rates. This happens when investors are nervous about the future and expect short term rates to fall. When so many investors think rates are going to fall, they will crowd into the longer-dated bonds to try to lock in the 'high' rate for as long as possible.

For example, assume that the economy is roaring, and the Fed Funds rate is 4%, 3-month rate is 4.5%, and the 10-year rate is 6%. This would be quite normal, as described and illustrated above. Now assume that you are an investor who thinks that the economy is weakening, and likely to slow down in the near future. If this were to happen, you would predict that the Federal Reserve would need to lower short term interest rates in order to juice the economy a bit (i.e., basic monetary policy). If this were true, and you expected all rates to go down in the near future, you would invest more in long-term bonds (10, 20, 30-year), in order to 'lock in' those good rates. When many investors begin to do this, the rates of long term bonds fall, and in extreme cases may actually fall below the rate of short term bonds, causing an inverted yield curve.

Inverted yield curves are very rare, occurring only once a decade or so, and almost always immediately before a recession. 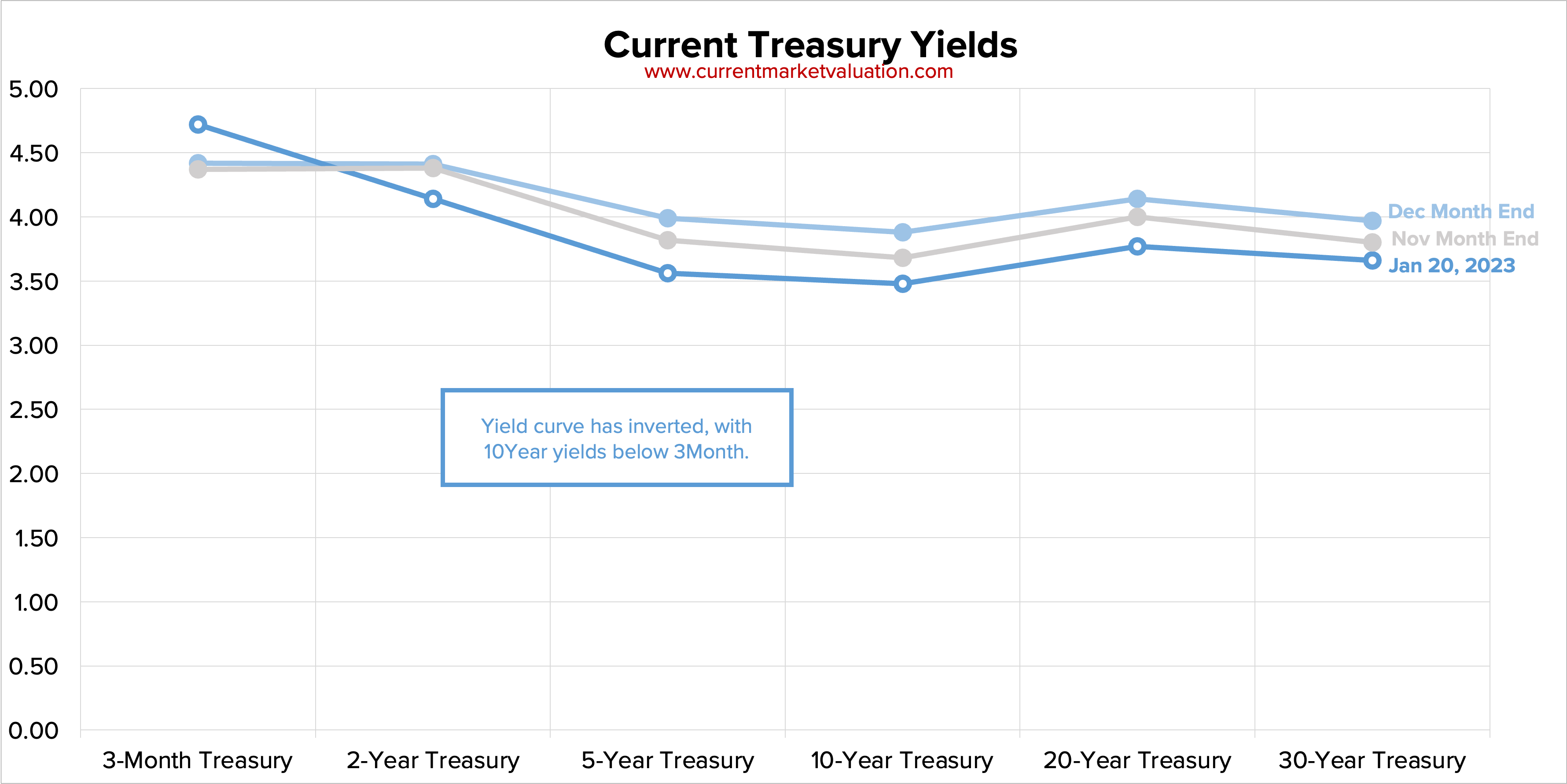 The above chart shows the shape of the current yield curve. The curve is becoming steeply inverted, not at all like the normal curve shown previously in Figure 2.

The traditional measure of whether or not the yield curve is said to be normal, flat, or inverted is by examining the relationship between the 3-month and 10-year rates. The below chart shows the value of the 10-year bond (normally high) minus the value of the 3-month bond (normally low). We should expect the result to be a positive number, given a normally sloped yield curve. This is observed in the chart below. The majority of the data points are above 0%, shaded blue. The few periods where the yield curve was inverted are shaded red. The gray vertical lines indicate recessions, and occur after each inversion. Now the same chart, just zoomed in with more detail to look at 2000 through the present. Again, in a normal rate environment the 10-year rate is much higher than the 3-month rate, so this spread will be a positive number. As the spread moves closer to zero, and as it turns negative, it reflects the 10-year rate falling below the three month rate, indicating that investors expect future economic slowdown in the near term. As you can see by the shaded recession areas, investors have almost always been correct in this prediction. For the last 50 years, every yield curve inversion has been soon followed by economic recession.

We now have all the data we need - but in order to get a better sense of the historical trend, we present it in a slightly different way. Figure 4 above showed the historical 10-Year to 3-Month yield spread, including the average spread over that time of 1.52%. Below is this same chart, but with the data centered around that average 1.52% value. In order to get a sense of the volatility of the data, bands of plus and minus 1 standard deviation from the average are added. This can be seen below in Figure 6. The red line indicates an inverted yield curve, where 10-year rates are lower than 3-month rates.

Statistically, about two-thirds of the time the yield spread should be within 1 standard deviation from the average. Broadly speaking, when the spread is below the average it indicates a selling opportunity, as flat/negative spreads are correlated with economic recessions and market downturns. Conversely, highly positive yield spreads tend to be buying opportunities, as they typically occur right after a rate-reduction policy response to a market downturn (i.e., when the market tanks the fed cuts short term rates to 0, and so yield spreads are high).

Lastly, we'll flip the y-axis on this chart in order to be consistent with "up" being values where the market is overvalued: Throughout this article the focus has been exclusively on the spread between the 3-month and 10-year Treasury instruments. This is typically the measure used when determining if the "yield curve" is inverted, but obviously it only represents two points on the curve. It is certainly possible that other points on the curve invert before or without the 10-year/3-month points inverting.

Likely the second-most common look is to inspect the 10-year rate versus the 2-year rate. Since these two points are closer to each other on the curve (on the x-axis, meaning simply that 2-year is closer in timespan to 10-year than 3-month is to 10-year), we should expect that the spread between them is typically smaller than that 10-year/3-month spread we've been looking at so far. Hence, it's reasonable to infer that this spread will invert sooner than the 10-year/2-year spread, as well.

The below chart tracks this spread in the same format as the model above. As of Fall 2022, you can see that the 10-year and 2-year Treasury spread has inverted. This bearish signal suggests that the overall model (based on the 10-year/3-month spread) may soon invert as well. The below two charts illustrate the 10Year-3Month yield curve spread mapped over S&P500 returns. The data series is just the price of the S&P500, with the color of the line highlighted red during periods of yield curve inversion. Clearly, you can see strong correlation where periods of inversion tend to precede stock market devaluations. The top chart (Figure 10) is the normal S&P500 you're used to seeing - the bottom chart (Figure 11) is the same data but with a logarithmic scale on the y-axis so that early periods are less vertically condensed. Below are additional resources on yield inversion.