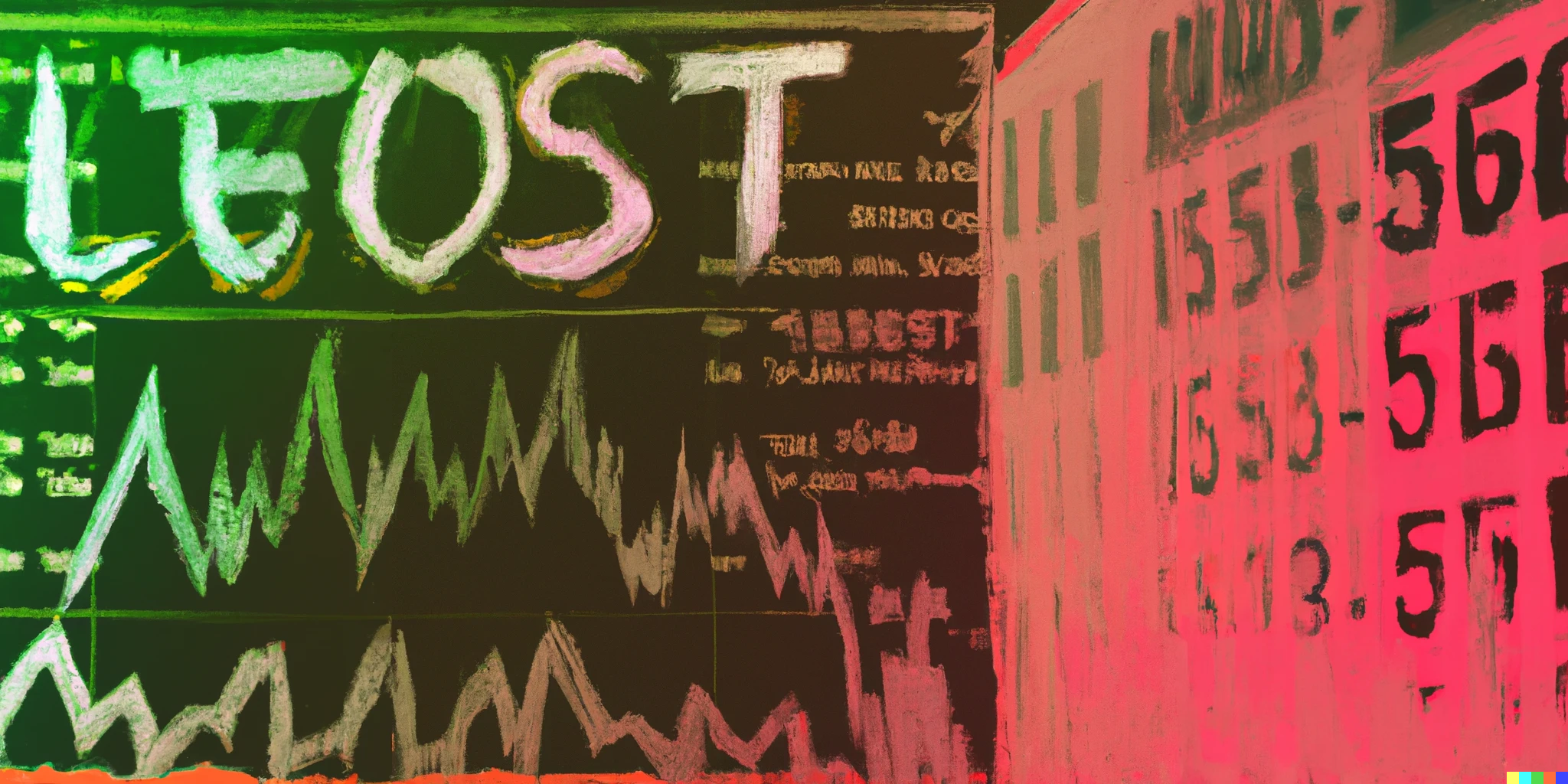 As of this writing the Yield Curve looks just about ready to invert, which combined with lots of other evidence suggests that the US may be heading towards a recession in the coming year. The data presented below suggests and illustrates that stock markets will likely underperform in the coming year or so. However the pattern is not consistent, especially recently, and trying to time the market is always a great way to lose money.

For awful political reasons, much hay has been made this past year about what is or isn't a recession. The classical rule-of-thumb has been that a recession is any two quarters of sequential GDP contraction. However, the official call is determined by the National Bureau of Economic Research (NBER) and does not follow any fixed statistical rule. From their FAQ:

NBER's traditional definition of a recession is that it is a significant decline in economic activity that is spread across the economy and that lasts more than a few months. The committee's view is that while each of the three criteria—depth, diffusion, and duration—needs to be met individually to some degree, extreme conditions revealed by one criterion may partially offset weaker indications from another.

Given NBER's data, the chart below shows S&P500 performance over 11 recessions from the past 70 post-war years. (The chart is copied from the CMV Yield Curve Model and so includes highlighted yield curve inversions, which are irrelevant here). 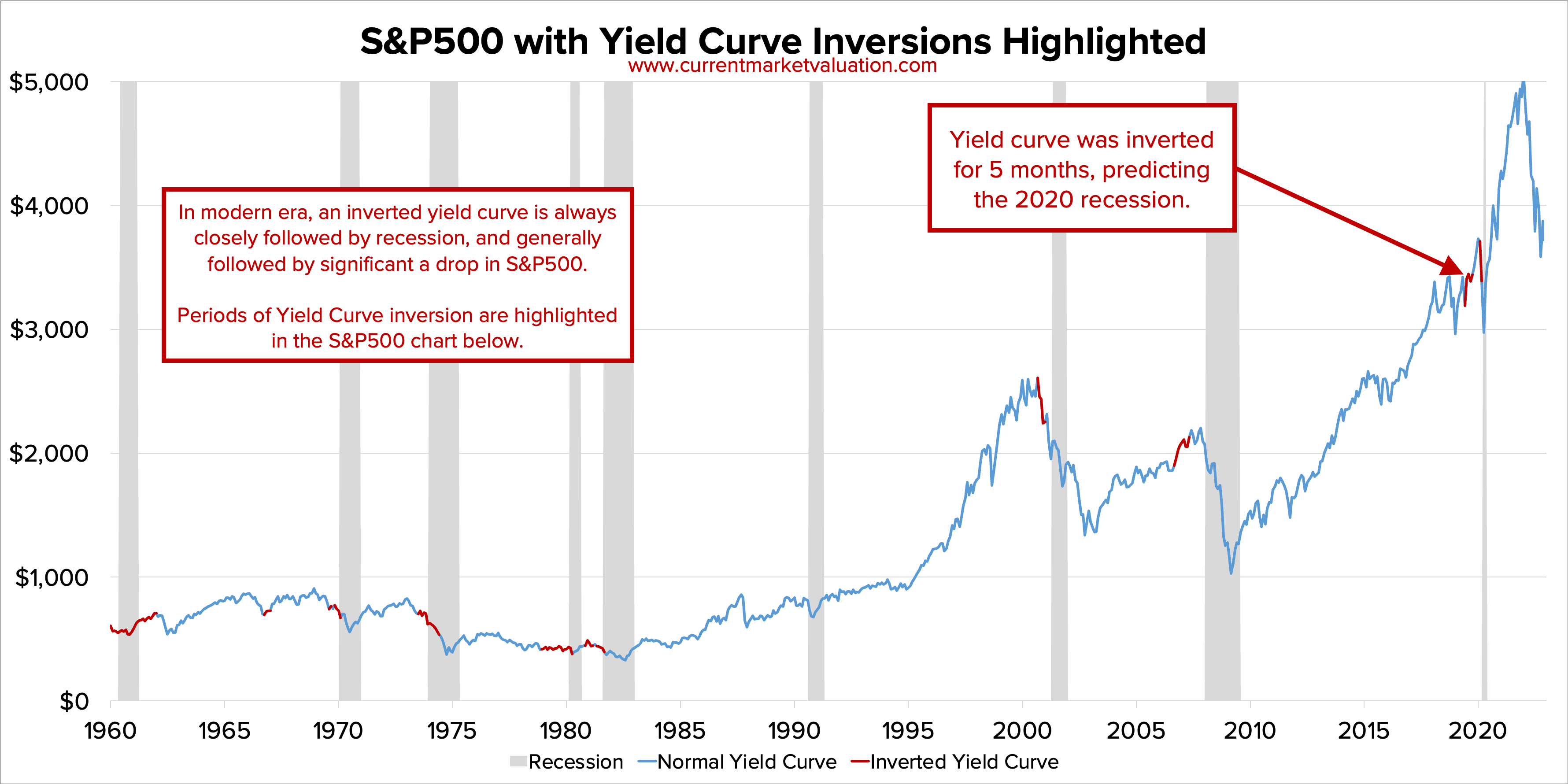 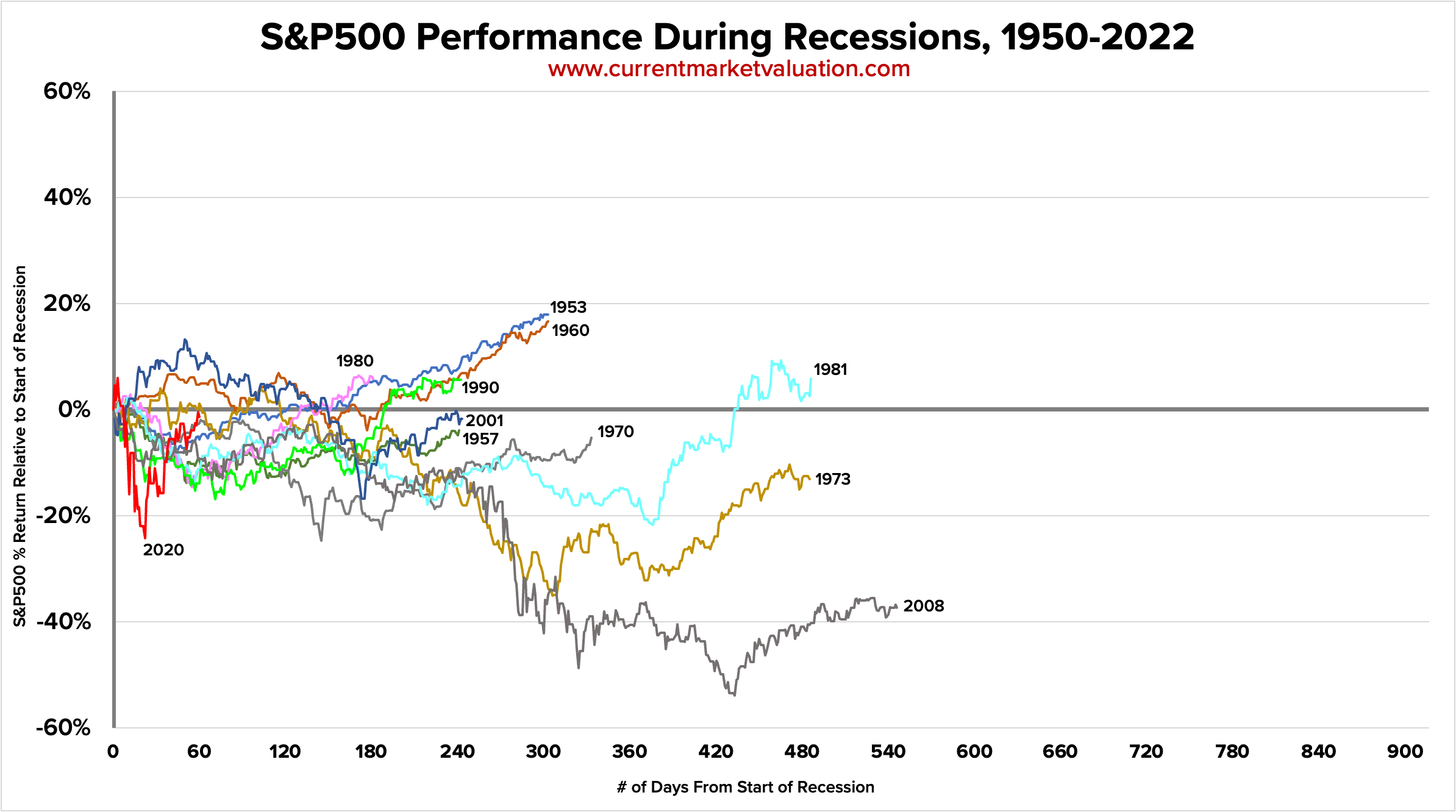 The above chart shows S&P500 stock market performance during each recession over the last 50 years, indexed to 0% on the day that NBER says the recession officially began.

A few things immediately stand out:

As the chart shows, recessions come side-by-side with stock market losses. Of the 11 recessions since 1950, the average recession ends after 312 days and with the stock market down only 1%. The average market bottom during the recession comes after 169 days with the S&P500 down 21%. These summary statistics are superimposed on the chart, below. 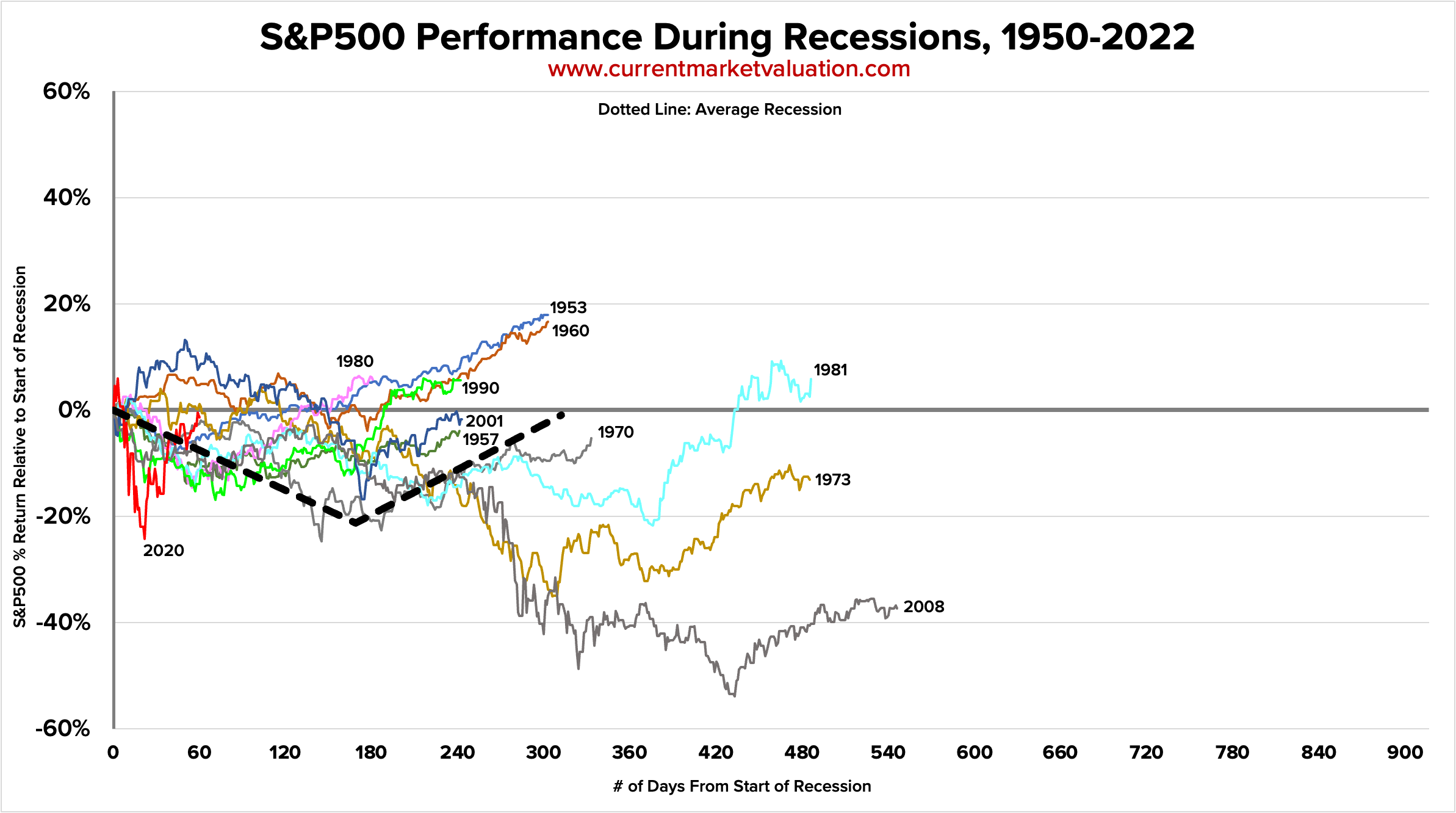 As shown above, by the time the average recession has ended the stock market has fully recovered. What happens next? Do markets tend to over-perform in the period right after a recession? This should be pretty easy to observe over the last 70 years.

Below is a chart similar to the format used above, showing S&P500 performance for all 11 recessions since 1950, indexed to 0% on the day each recession started. However, this chart shows additional performance for 1 year after each recession ends. This data is a bit hard to visualize - it appears like in most cases the stock market recovery continues for the year after the recession ends, but it's hard to get a good sense of the pattern since each starting point is different. 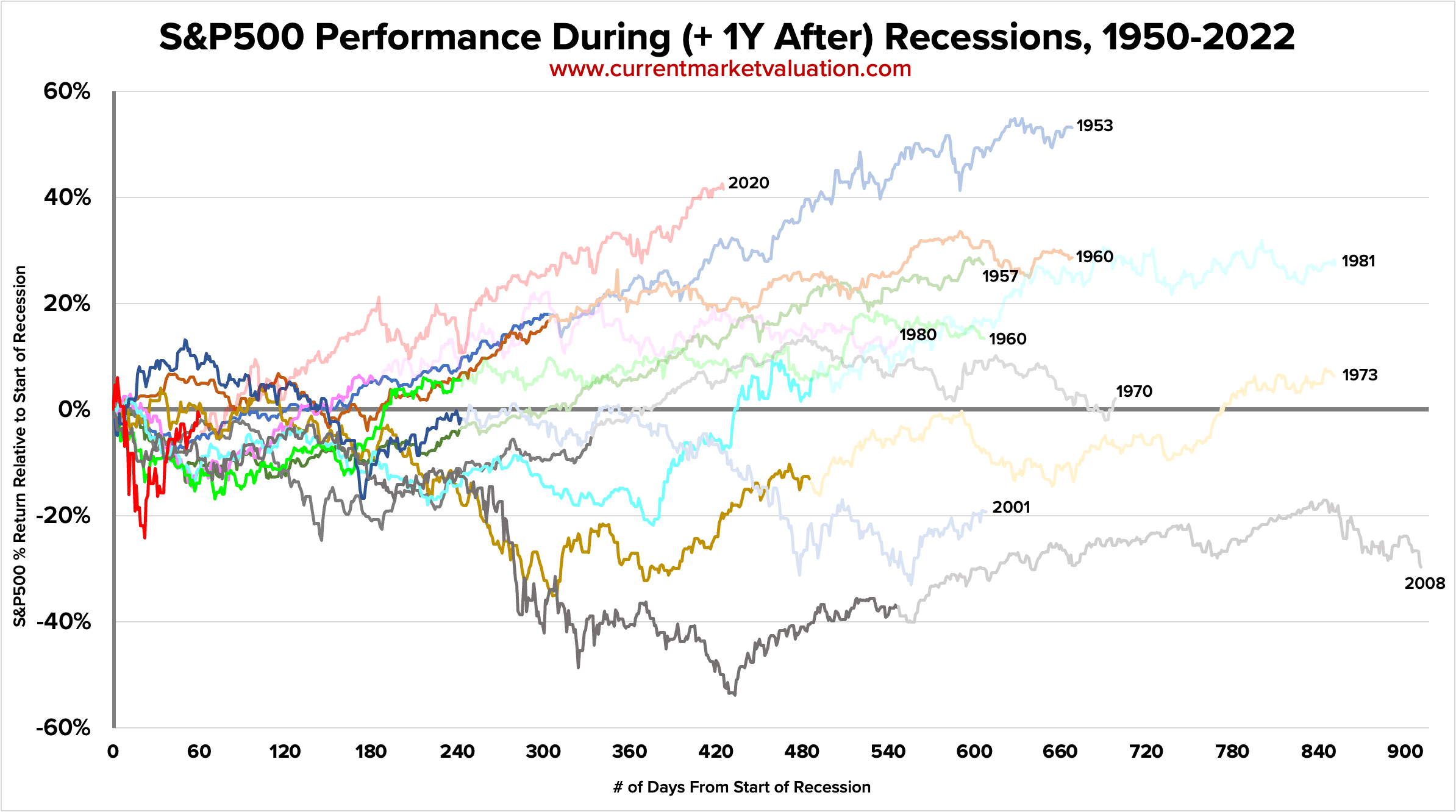 To better visualize this, the below chart shows the same data, but indexed to begin at the end of the average recession calculated in the section above. 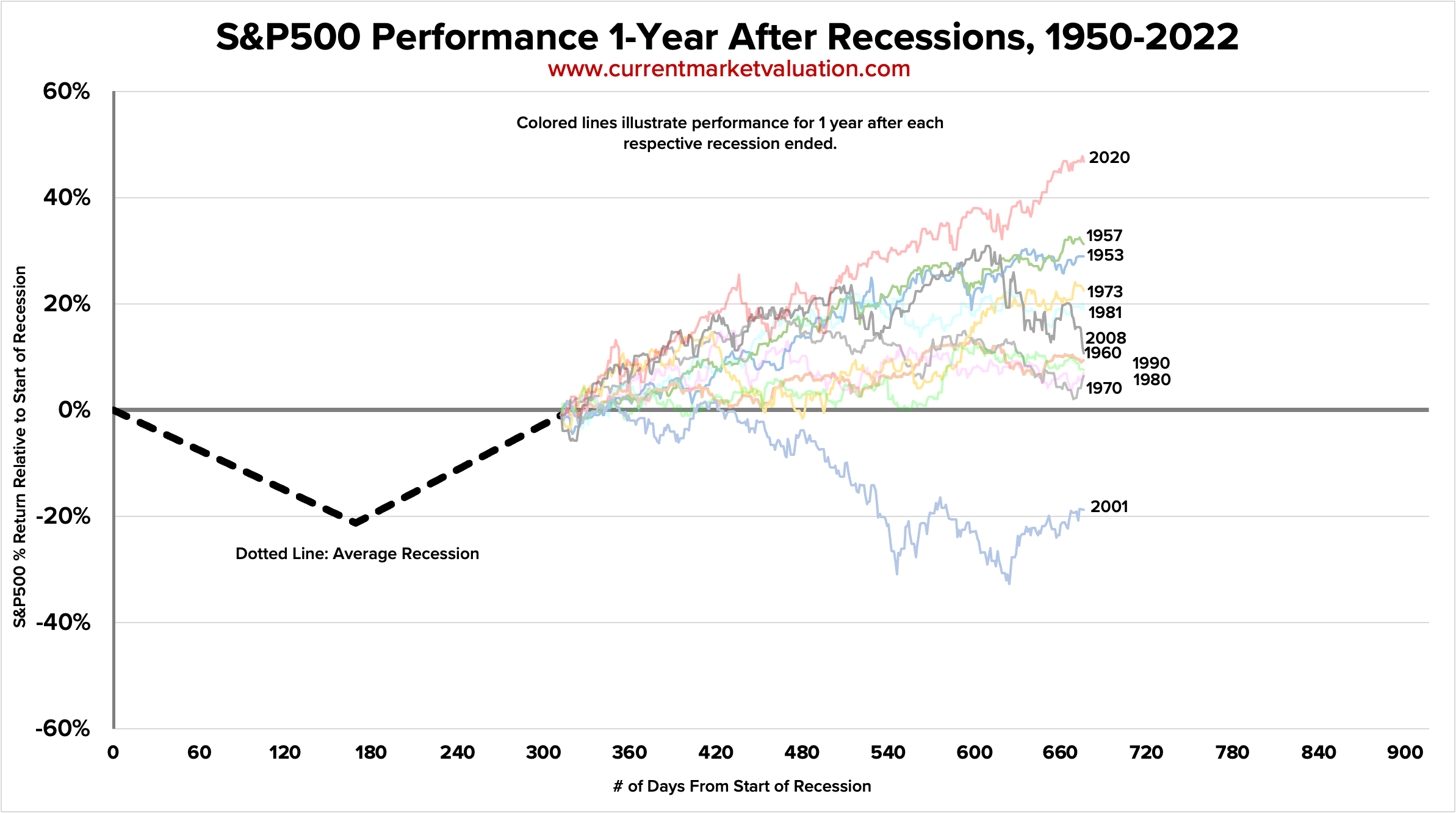 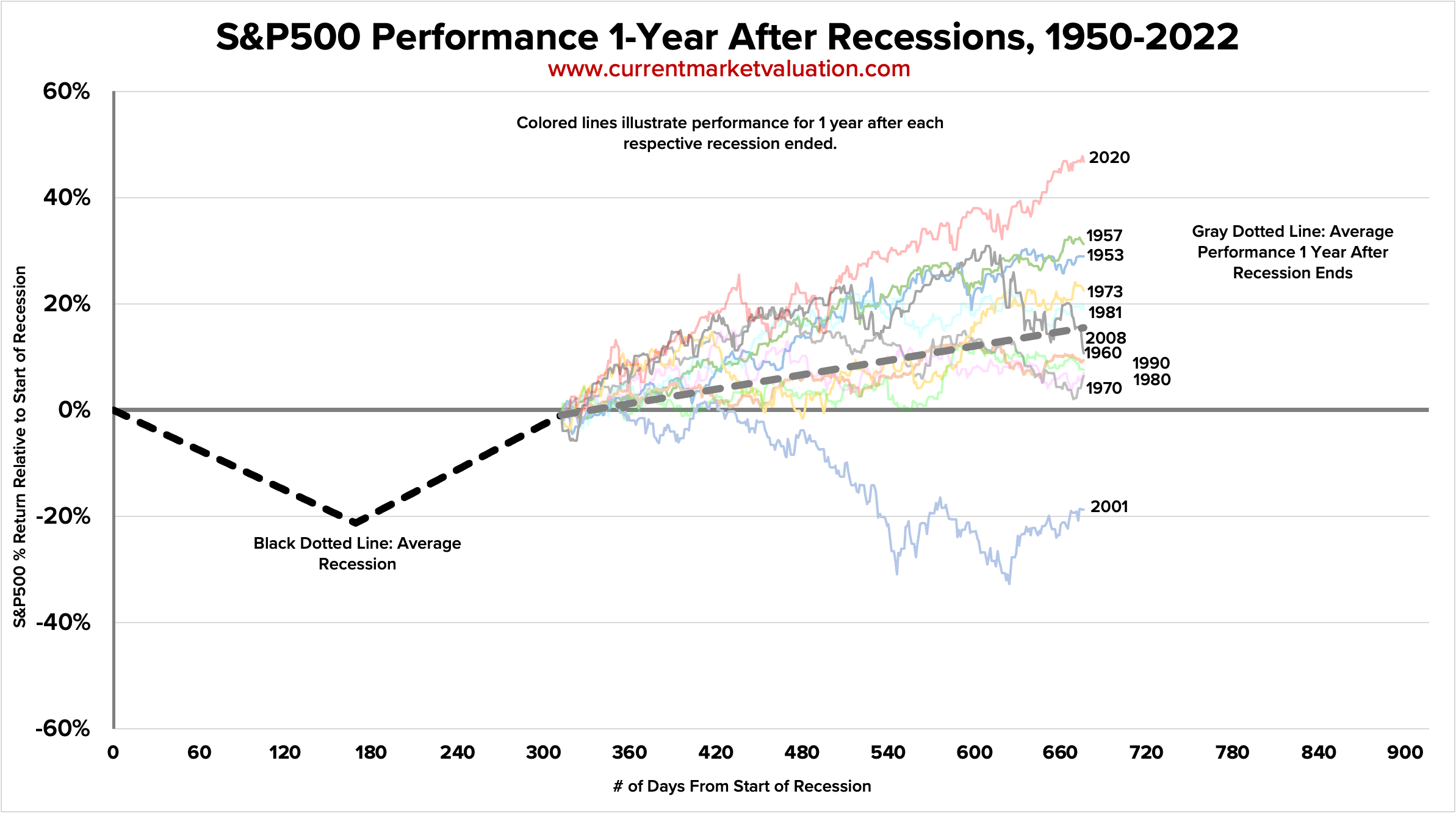 We now have a very clear picture of S&P500 performance during-and-after every recession since 1950. The last reasonable question to ask is whether or not we're looking at the data too late. Recessions are often predicted long before they actually occur, and the stock market should be pricing this in. That is, we should expect that by the time a recession formally beings, the stock market would have already fallen. Let's take a look. Below is another chart in the same style as before, now showing the 1-year period prior to the start of each recession. Once again, returns are indexed to 0% on the day the recession began. 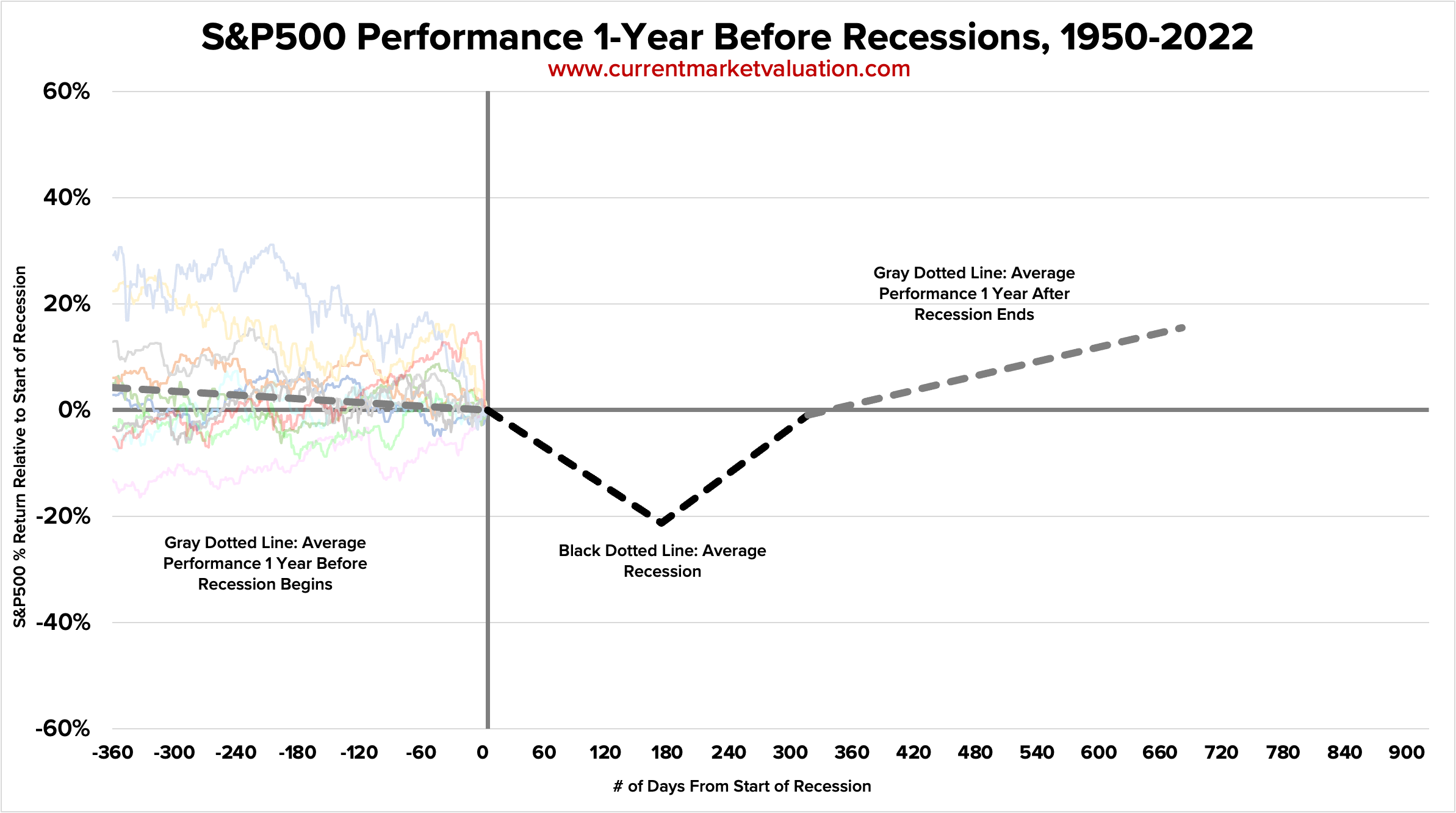 The year before each recession seems pretty well distributed. Once again, graphing the average performance (dotted line) shows that on average the S&P500 falls about 4% in the each prior to each recession.

The chart below summarizes all the data thus far: 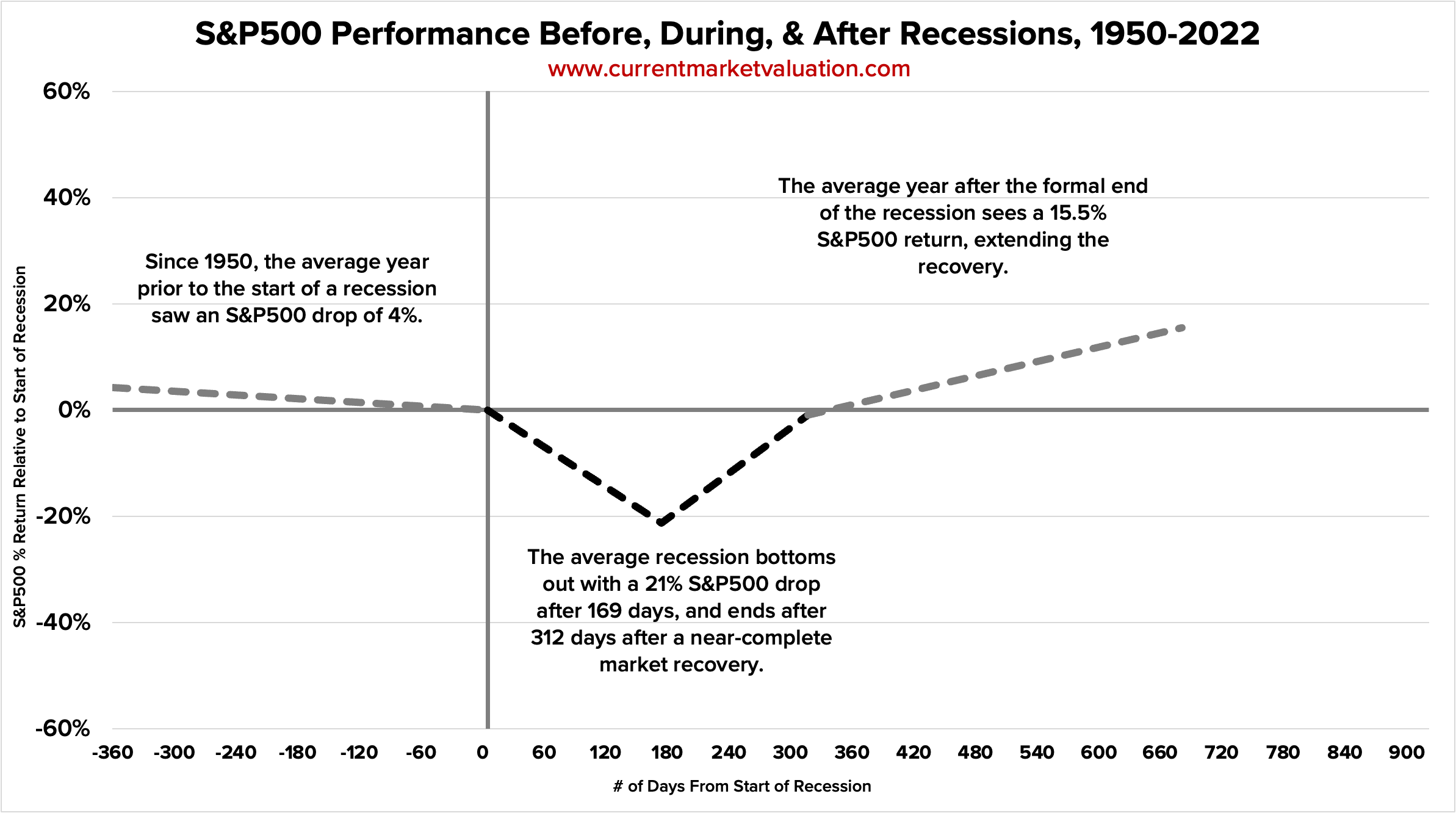 From here we can draw the following conclusions:

By and large this would suggest that if you believe a recession is coming in the near future, history suggests you'd be best off by waiting until the recession itself before putting more money in the market. As always though, trying to time the exact market bottom is a fool's game, and by waiting to invest you risk sitting on the sidelines for too long, and missing out on the steep post-trough recovery.