Over the weekend I was listening to the excellent tech/business podcast Pivot podcast, with guest Professor Aswath Damodaran - who is introduced as having "literally written the book on valuation". The direct link to that section of the show, and relevant quote is below.


Scott Galloway: What is your view on the market as it relates to valuation?


Aswath Damodaran: The first thing that's happened is that there aren't too many places in this market where you can earn a nice, safe return. When the t-bond rate is 1.5%, your alternatives are already shredded. Stocks look expensive relative to history, but not relative to bonds. This is a market where everything is being driven by the fact that interest rates are so low. And when interest rates are low, everything else gets pushed up. Holding all else constant, if I make the t-bond rate go from 5% to 1.5%, the P/E ratio for every stock would double or even triple, simply because you make the alternatives less attractive.


[Quotes are lightly edited for clarity]

This is not surprising and very much consistent with guidance on our Interest Rate Valuation Model, which looks at equity prices relative to treasury bond rates. I wanted to quickly chart Aswath's quote above to see how true this really holds up.

Looking at the Data

The below chart shows the data for the last ~50 years. In Blue is the S&P500 PE ratio (left axis) and Orange is 10Y Treasury bond rates, (right axis). The story isn't as clear as expected. While interest rates have steadily marched downwards over the time frame, PE ratios have been far more volatile. (The large outlier spikes in PE being due to periods of exceptionally low corporate earnings, which due to the literal definition of the price-divided-by-earnings ratio, will spike the ratio asymptotically when earnings get close to zero). Still, there is clearly an upward trend to the PE ratio over this time. 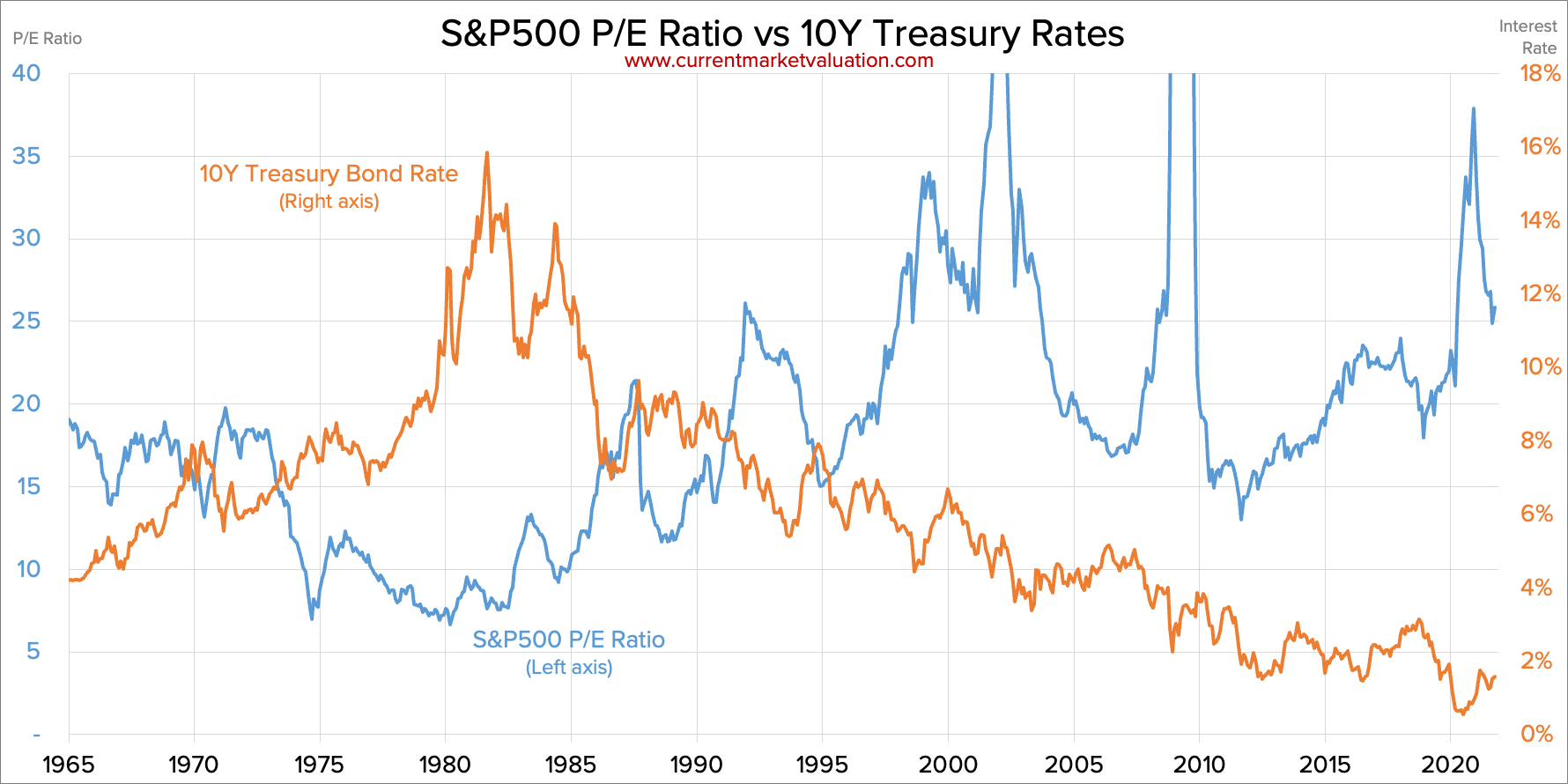 Let's take two other quick looks at the same data. First, a scatterplot showing the monthly P/E (x-axis) and 10Y rates (y-axis). [Note: I've removed the outlier data from early 2009 where P/E's were asymptotically high due to near-zero corporate earnings]. Here you can much more clearly see the correlation between the data, where high interest rates are usually paired with low P/E ratios, and vice versa. I.e., the trend line is downward sloping. Looking at the literal trend line, you can see that rates of 5% generally correlate to P/E of ~22, and rates of 1.5% would have a P/E of more-or-less 36. Not quite the "double or even triple" that Prof. Damodaran suggests, but directionally close. 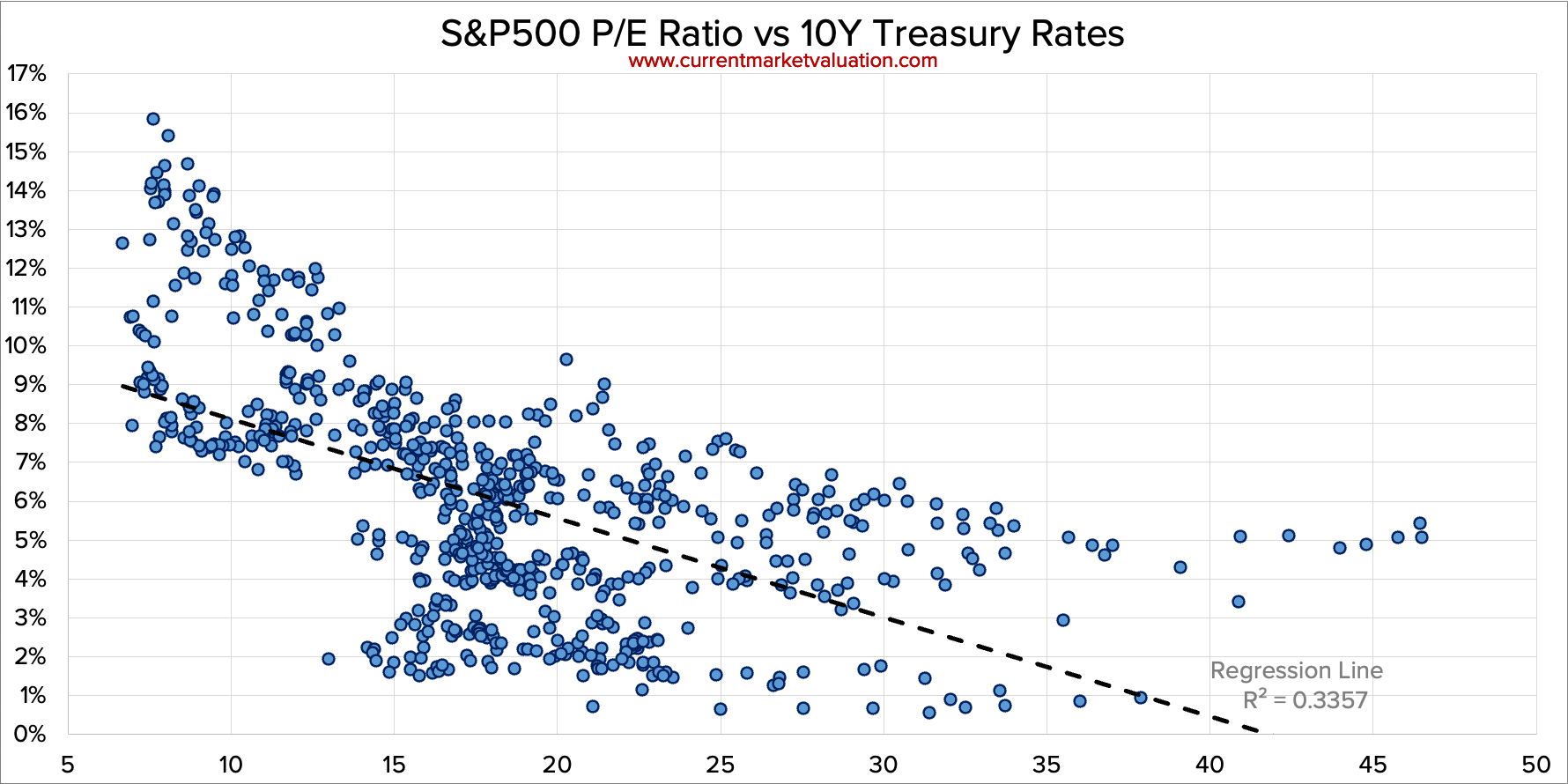 Since we've already come this far, I can't help but make an overall market valuation model based on data, similar to the core models we publish. To get there, I've looked at each data set and re-plotted them in terms of the number of standard deviations they are above/below their respective trend lines, and then netting the two together to get an indication of their performance relative to each other. 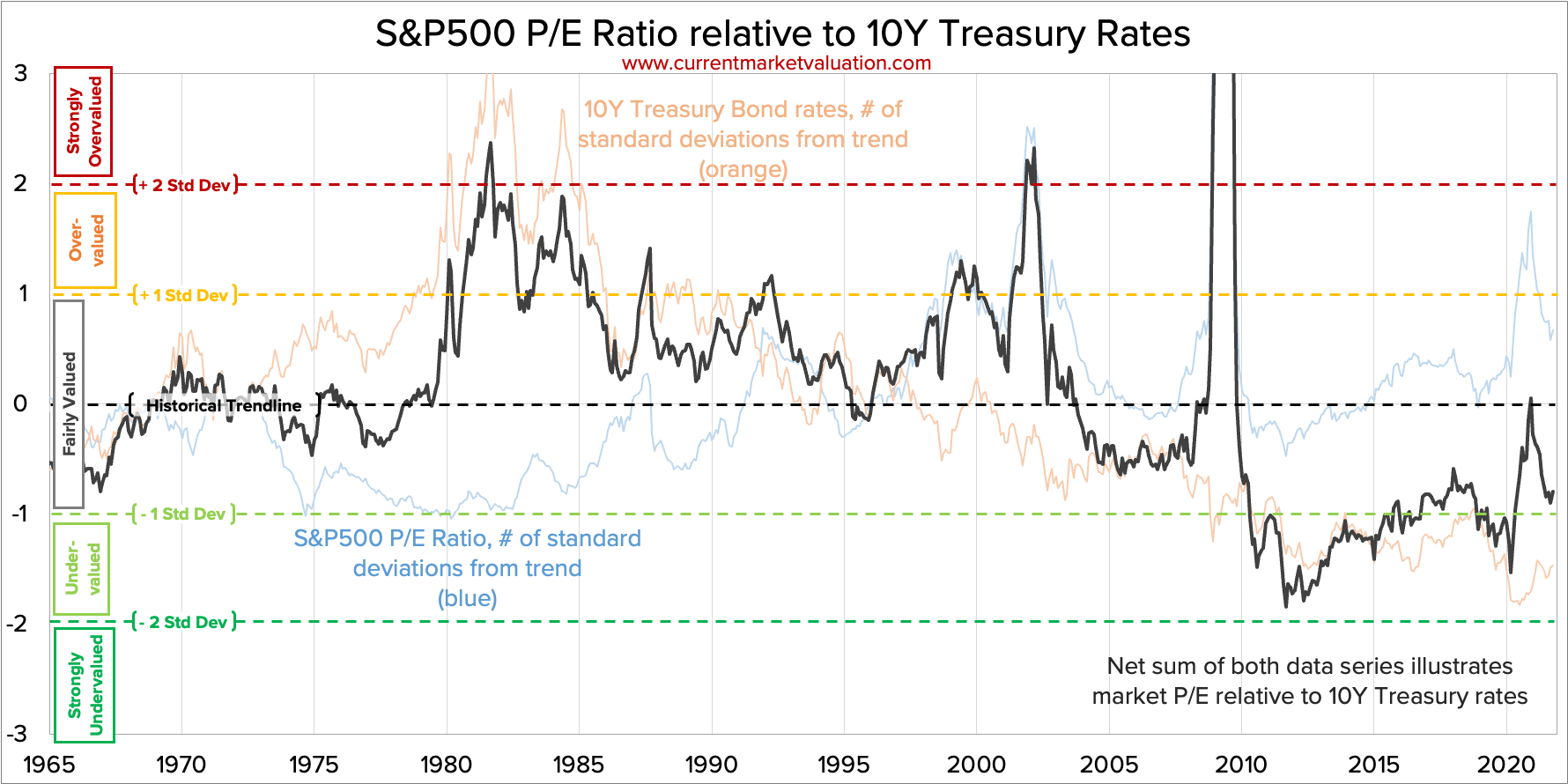 So here you can see, for example, that the most recent data point on the far right shows that the S&P500 P/E is currently ~0.7 standard deviations above the norm, whereas the 10Y Treasury rate is about 1.5 standard deviations below its own norm. The composite of the two (black line) suggests the market P/E is actually low (!), relative to interest rates. So even in these frothy times of high valuations, in terms of interest rates this suggests that prices aren't actually out of control.

Prof. Damodaran ends his response with the below comment, which I agree is exactly the right question to be asking:

Aswath Damodaran: So the real debate is: are t-bond rates at 1.5% sustainable? That is the core. It's not whether the stocks are overpriced - it's whether the level of interest rates we're observing are sustainable given the fact that inflation seems to be back.