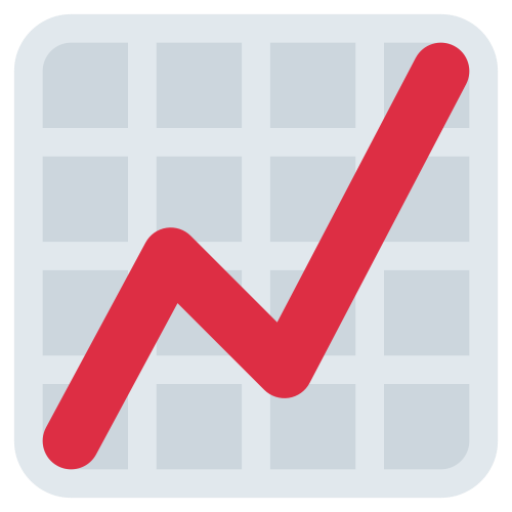 Sponsored by DayTradle, a day trading simulation game. Everyone starts with $1,000. There is no way to get more. How long can you make it last?

Can you beat the market?

The Buffett Indicator is the ratio of the total United States stock market to GDP. As of December 2, 2022 the ration is calculated as:

This ratio fluctuates over time since the value of the stock market can be very volatile, but GDP tends to grow much more predictably. The average "trend line" value of the ratio is shown below. The current ratio of 168% is approximately 31% (or about 1.0 standard deviations) above the historical trend line, suggesting that the stock market is Fairly Valued relative to GDP.

For much more analysis and information on the data sources, methodology, and counterpoints to this model, continue reading. 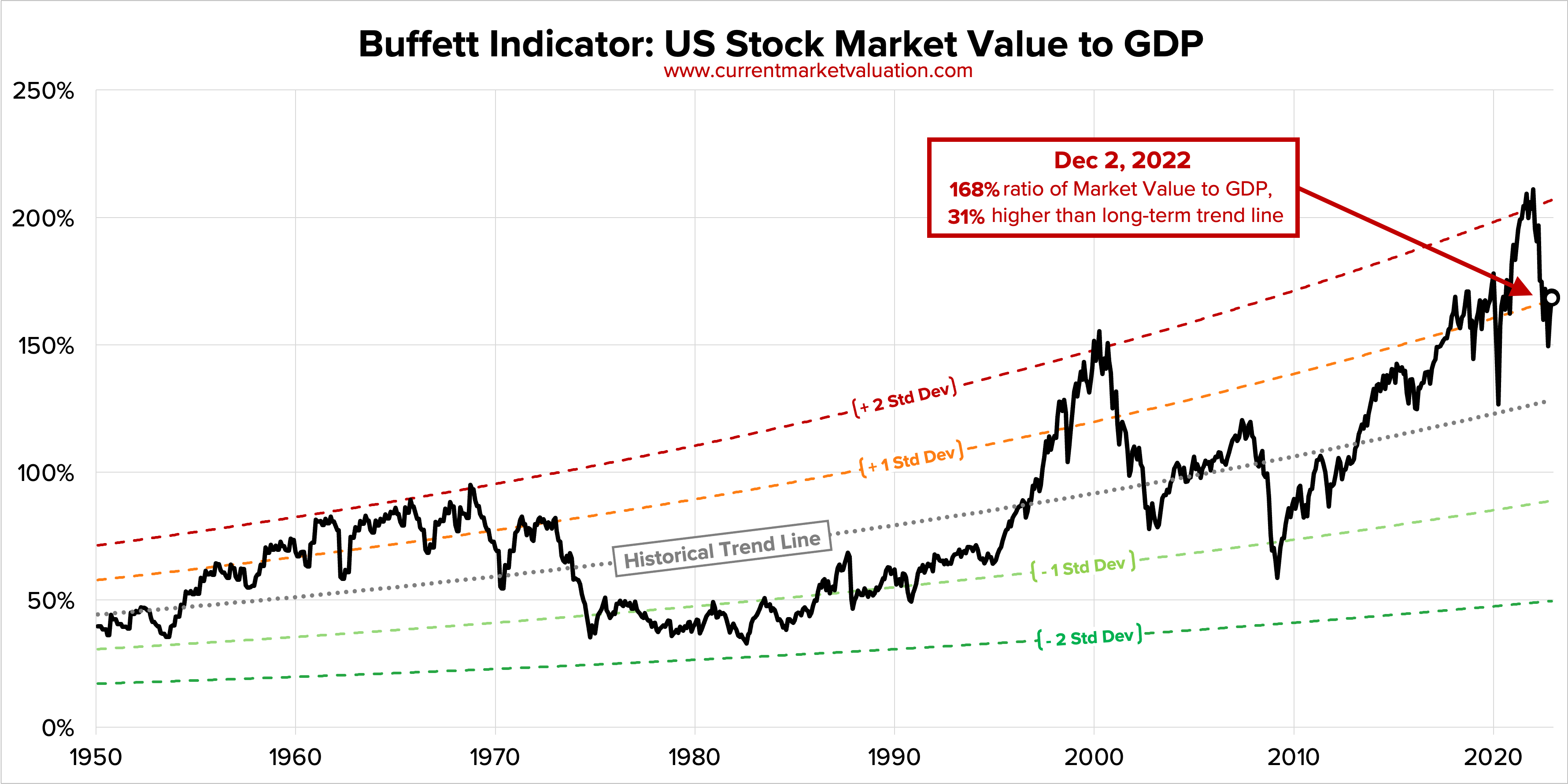 The Buffett Indicator is the ratio of total US stock market value divided by GDP. Named after Warren Buffett, who called the ratio "the best single measure of where valuations stand at any given moment". (Buffett has since walked back those comments, hesitating to endorse any single measure as either comprehensive or consistent over time, but this ratio remains credited to his name). To calculate the ratio, we need to get data for both metrics: Total Market Value and GDP.

The most common measurement of the aggregate value of the US stock market is the Wilshire 5000. This is available directly from Wilshire (links to all data sources below), with monthly data starting in 1971, and daily measures beginning in 1980. The Wilshire index was created such that a 1-point increase in the index corresponds to a $1 billion increase in US market cap. Per Wilshire, that 1:1 ratio has slightly drifted, and as of 2020 a 1-point increase in the index corresponded to a $1.05 billion dollar increase.

For data prior to 1970, the most appropriate data for total stock market value is Z.1 Financial Account - Nonfinancial corporate business; corporate equities; liability, Level, published by the Federal Reserve, which provides a quarterly estimate of total market value back to 1945.

These combined data are shown below. The current estimate of composite US stock market value is $43.5T. GDP (Gross Domestic Product) represents the total annual production of the US economy. It is measured quarterly by the US Government's Bureau of Economic Analysis. GDP is a static measurement of prior economic activity - it does not forecast the future or include any expectation or valuation of future economic activity or economic growth.

GDP is calculated and published quarterly, several months in arrears, such that by the time the data is published it is for a quarter that ended several months ago. The Federal Reserve Bank of Atlanta publishes GDPNow, an estimate of the current quarter's GDP growth rate, which can be used to calculate an estimate for the current month's (annualized) GDP value of $25.9 trillion dollars. A historical chart of GDP is shown below. The Ratio of the Two

Given that the stock market value represents the present value of expected future economic activity, and that GDP is a measure of most recent actual economic activity, the ratio of these two data series represents expected future returns relative to current performance. (A bit similar to the P/E ratio of a particular stock.) It stands to reason that this ratio would remain relatively stable over time, increasing slowly as new technology creates more efficient returns from labor and capital.

The historic value of the Buffett Indicator ratio is shown below:

In this chart, the "Historical Trend Line" is an exponential regression line illustrating the historic growth rate of the Buffett Indicator ratio. Given the high volatility of the stock market value, the ratio tends to deviate from the trend line quite materially, sometimes for decades at a time.

The standard deviation gives insight into how relatively high or low the observed Buffett Indicator values are from the historical trend line. Bands showing +/- one and two standard deviations can be mapped onto the data, and are shown below:

These standard deviation bands correspond with CMV ratings to estimate overall stock market over/undervaluation. As illustrated, the current Buffett Indicator value of 168% is 1.0 standard deviations above the trend line, indicating the market is Fairly Valued.

And finally, below is the same chart, but with only the last twenty years of data, so that recent market activity can be seen more clearly. Predictive Value of the Model

While it is never possible to predict future stock market performance, it is simple to look at historical data to see how the market has performed after periods of high and low valuation of the Buffett Indicator.

The above chart shows monthly datapoints from 1950 to 2017, mapping the relative value of the Buffett Indicator model (x-axis) against the subsequent 5 year S&P500 returns (y-axis). The colored, dashed vertical lines indicate the same under/overvaluation bands as shown in previous models (i.e., values to the right of the dark red line indicate datapoints that were > 2 standard deviations above the trend line, indicating the market was 'Strongly Overvalued').

A few final comments on this:

Criticisms of The Buffett Indicator

No single metric is illustrative of the health or relative valuation entire market. Common criticisms of the Buffett Indicator are:

The Buffett Indicator only considers the value of the stock market, but does not consider how stocks are valued relative to alternative investments, such as bonds.

When interest rates are high, bonds pay a high return to investors, which lowers demand (and prices) of stocks. Additionally, higher interest rates means it's more expensive for businesses to borrow money, making it harder to borrow cash as a way to finance growth. Any business that takes on debt will face relatively higher interest payments, and therefore fewer profits. Less corporate profits means lower corporate stock values. The corollary to this is also true. Low interest rates means bonds pay less to investors, which lowers demand for them, which raises stock prices in relation to bonds. Low interest rates make it easy for corporations to borrow cash to finance growth. Corporate interest payments will be low, making profits higher.

This can be interpreted to mean that during the .com bubble, equity investors had other good options for their money - but they still piled recklessly into stocks. Whereas today, investing in bonds returns relatively little. Today's investors need to seek a return from somewhere, and low interest rates are forcing them to seek that return from riskier assets, effectively pumping up the stock market. While this doesn't justify the high Buffett Indicator on any fundamental basis, it does suggest that the market today is less likely to quickly collapse like it did in 2000, and that it may have reason to stay abnormally high for as long as interest rates are abnormally low.

For additional detail on the effect interest rates have on stock prices, view our Interest Rate Model.

A second fair criticism of the Buffett Indicator is that the stock market valuation reflects international activity while GDP does not. Though GDP does include national exports, it would not include something like the sales Amazon makes in Italy (sourced from Italian fulfillment centers). However, Amazon's Italian business is certainly priced into its overall stock price, which is listed in the US. This would therefore drive a higher Buffett Indicator value, since the numerator (total stock market value) is going up, while the denominator (GDP) is unaffected. As globalization has expanded steadily over the last 50 years, this should be a key driver in the growth of the indicator over time. Additionally, this would make the Buffett Indicator value for other (smaller, non-USA countries) even more volatile, as a smaller stock market is likely to be dominated by large international firms.

This model expects a "fair" Buffett Indicator value of 50% in 1960, but ~120% in 2020. Part of that natural increase is due to technological advances that lead to higher profits for existing firms, or from the creation of new industries entirely. Another part of that natural increase is because US market value is growing faster than GDP due to the rise of international sales of US-based firms. The key point here is that the model is looking at relative performance against the indicator's own trend rate, and not just saying "the Buffett Indicator is high".

Below are some classics on fundamentals-based value investing. While these aren't specifically about the Buffett Indicator, they espouse similar ideas, and are strongly recommended resources. An accessible, and intuitive, guide to stock valuation. Valuation is at the heart of any investment decision, whether that decision is to buy, sell, or hold. In The Little Book of Valuation, expert Aswath Damodaran explains the techniques in language that any investors can understand. The greatest investment advisor of the twentieth century, Benjamin Graham, taught and inspired people worldwide. The father of value investing, this is the updated classic from 1949. The definitive textbook on all topics related to investment valuation tools and techniques. Literally a textbook - not light reading. A Random Walk Down Wall Street

Whether you’re considering your first 401k contribution, contemplating retirement, or anywhere in between, A Random Walk Down Wall Street is the best investment guide money can buy.